skip to main | skip to sidebar

DO NOT EAT THE BURGER KING "BIG FISH" SANDWICH!

Last Friday, as my last hurrah of eating solid food before the oral surgery, we went to Burger King and McDonald's to sample and compare their fish sandwiches (both on sale on Fridays in Lent*). The McDonald's fish sandwich was delicious! The "lightly steamed" bun was tender and sweet, the proportions of cheese and tartar sauce were just right, and even though the sandwich had been sitting under the heat lamp, the fish actually tasted pretty fresh and flavorful--and it was clearly a nice thick filet, not reconstituted fish product.

Then we moseyed over to the Burger King next door for course two. Oh, if only some merciful angel would have appeared at the door, flaming sword in hand, to turn us back! Alas, we entered, to our doom. I cannot describe the horror that awaited us. Or I would rather not describe it, as even the memory is almost enough to make one gag and retch.

As Brandon said in its defense, the sandwich was a good idea--unlike the McDonald's Filet-O-Fish, the BK Big Fish is quite large, with shredded lettuce and a generous amount of tartar sauce on both top and bottom. The breading on the large "fish" patty was also crisp and delicious. but the "fish" product inside! It was the most disgusting thing I can remember ever eating. It was maybe slightly less gross than eating someone else's snot. The gooey, translucent sight of it made me think of wallpaper paste. I think it might have had a slight fish-like flavor, but I may have just charitably imagined it.

Anyway, the sandwiches were only $1.50 each, but I'd say in reality they're worth about -$1.50. Meaning, if someone were to come up to me with a BK Big Fish and say "Give me $1.50 or I'll make you eat this sandwich," I would hand over the cash without hesitation. And if you have any idea how miserly I am, you would understand just what a disgusting sandwich the "Big Fish" must be.

*Only in select locations.
Posted by Virgie P. at 4:59 PM

"maybe slightly less gross than eating someone else's snot" - ha ha ha!! I am still laughing. This sounds even more disgusting than looking at your own jaw bone through the hole in the back of your mouth. 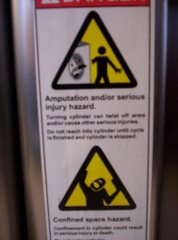 Virgie P.
One of those "creative types." New pastor of a tiny Presbyterian church. My husband is Brandon, and you will see his name in my blog, I suppose.